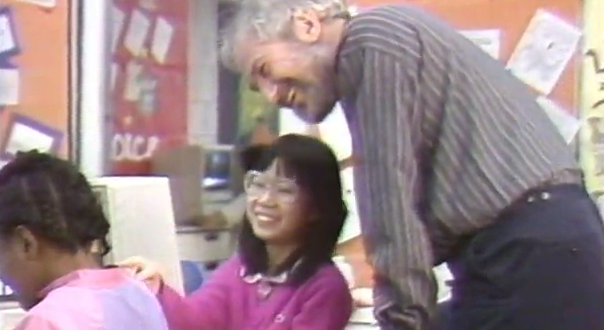 In 1986, the MIT Media Lab made a laserdisc describing their research groups and mission. This video describes Seymour Papert’s Learning Research Group’s work at the Hennigan (middle) School in Boston. View the entire laser disc video at the Internet Archive.

Seymour Papert: (00:23)
The Hennigan School is a public inner city elementary school. It was selected in part because of the composition of the student body, 40% black, 40% Hispanic, 18% Caucasian, 2% Asians. From the side of academic performance, it has a magnet school program and was able to draw a certain number of children who were put in what are called advanced work classes. Then it has a core of children in regular inner city classes. And in addition, it has a developed special needs program. To be a school of the future, one has to do more than bring technology. One has to create a culture. Above all, we have to tackle the problems of demographics that are represented in the school.

Seymour Papert: (01:15)
This is an attempt to make a sketch of what a school of the future might be like. Now nobody really knows what the future will be like, but we know what it won’t be like. We know it won’t be lots of children sitting in desks with pencil and paper writing all the day. We know that these new technologies, these computers will be an important part of it. If you go into any school or any home, you’ll find many pencils, many crayons, many paintbrushes because these are instruments that people made part of their lives. They use the pencil whenever they have a need for it, to draw, to write a story, to calculate. And so the computer is the natural instrument for doing mathematics, for music, for 100 other things. And our goal here is to make it sufficiently part of the culture of the place that everybody uses it when it’s needed.

Seymour Papert: (02:07)
There are many aspects of what goes on in the school. We see children here writing stories. In other parts of the school, we see music. We see very special projects like LEGO Logo. This might sound like playing with toys, but that’s just what so clever about it. They are played with toys in a very sophisticated way. The LEGO Logo project is one in which children build with the construction set LEGO and then interface their construction with the computer so that they can control them. The children are learning to program. They’re learning important ideas about motion, about feedback. They’re learning principles of engineering design. Above all, they’re learning that knowledge is a unified thing and that the scientific and formal and mathematical knowledge is not something separate from their passion for toys, from the things they did since they were small children before they came to school.

Seymour Papert: (03:09)
For a long time, I’ve dreamed that music should have a very different role in the lives of children and how they learn. It’s a strange fact about music that while we expect children to be creative in all other domains, we only expect them to reproduce other people’s creative work in music. We expect children to make their own drawings, write their own stories, compose their own poems. We don’t expect them to compose their own music. And this is a peculiar state of affairs which might be related to the nature of musical technology. With the computer as a musical instrument, it comes possible to create a piece of music and hear it independently of your own performance. It does not mean sitting children in front of a computer all day or even all day music time. They work with the computer. They work with real instruments. They even make their own instruments. 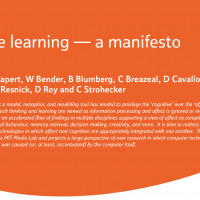