Logo is about 25 years old and was therefore approximately half-way through its lifetime (so far) when it moved out of a sheltered childhood in the laboratory to become an adult actor in the real world of schools. The first version to achieve any significant circulation was implemented on the TI 99/4, whose 32 spritely turtles allowed far more dynamic displays than is possible even today on any of the mainstream school computers. But despite its relatively klutzy graphics and limited computational power, the Apple was the platform on which Logo was elevated to a social scale, both in terms of numbers of users – in the tens of millions of children – and in terms of its role in the development of educational computing as a profession and an intellectual discipline. A 1986 bibliography already listed over five hundred publications explicitly about Logo and this was only a small fraction of publications that discussed it under other headings. Along with many strengths, this literature has a weakness that I shall be trying to remedy in these columns. Most writing in praise or in criticism of Logo takes a particular form of it as given; my intention here is to adopt what one would call a developmental approach if one were talking about children.

Approaching Logo as an idea in development rather than a fixed thing to be judged has placed me in a third position in relation to debates between people who think Logo is great and those who think it has “failed.” Just as Logo encourages children to see bugs as positive things to think about, so I have taken weaknesses in the nature and the uses of Logo as rich sources of ideas about where to go next.1

A 1980 Logo teacher looking at a version from thirteen years earlier and one from thirteen years later might recognize neither as “Logo.” The former because it had no turtle. How could it be Logo? The latter – for example the LCSI computational construction system called MicroWorlds – because it has the very features that have come to be seen in debates about educational computing as “the opposite of Logo.” LogoWriter had already shifted the terms of one such debate from “should we do Logo or should we do word processing” to consideration of how word processing should be integrated into a computational environment. What seemed to be a problem to be solved by making a choice was dissolved when it became possible to have both. MicroWorlds Logo goes much further by bringing into a Logo environment many more features that have been poles of attraction away from Logo. Among these are drawing in the style of KidPix, buttons in the style of Hypercard, and the multi-processing that is exploited when spreadsheets are used as tools for wider uses than financial planning.

Increasing the speed and memory size of affordable computers allowed a dramatic expansion of what could be done with Logo. But is this trend simply one of throwing in the kitchen sink, or is there also a systematic development of ideas and perspectives?

Some years ago I addressed a similar problem by using a well-known story of three blind men and an elephant as a parable for the multiplicity of facets of computers in general and Logo in particular. Here I shall use a new twist on the story to address the question: Was the direction of Logo’s growth governed by rational considerations or the whim of designers?

The story allows us to cast the question about the integrity of Logo as: Where’s the elephant? As teachers we might well worry: in our desire to show children many ways to use the computer are we missing the wood for the trees? A hunch about how to pin down my thoughts about this dilemma led me to browse at a number of books. Some were obviously relevant: books about computers, about education, and about putting the two together.

The critical logician in me felt a little silly when the associationist bricoleur in me reached for Robert Dehort’s The Life and Lore of the Elephant and Why Animals Have Tails. “It’s just a metaphor, stupid!” said the logical me. “Real elephants have nothing to do with this!” But the bricoleur won, for the trail led me to see the connection between ears, legs, and tails in a deeper light than I had before. And it turned the story into a much better metaphor for parts and wholes of understanding.

Why does the elephant have such big floppy ears? Last month I would have said, “Must have to do with how and what the elephant hears.” No doubt, but I learned something else from Robert Dehort’s lovely book. Because an elephant has so much more volume than surface area it has a hard time dissipating heat and the big floppy ears contribute by serving as radiators. I suddenly imagined the blind man exclaiming as he touched the leg: “Gee, there’s not enough skin here to blow off the heat from all the muscles in this leg. . . . I bet this thing has big floppy ears.”

The smallness of the tail can also be connected with the bigness of the legs. If you look at a dinosaur or a cat you will see how in both cases the tail helps to balance the animal. But an animal with a squat body like an elephant firmly planted on its four big columns of legs doesn’t need a counter-weight in a tail.2

By this time the meaning of the word “blind” in the original story had changed for me. In its complacent reading the story allows those of us who are blessed with sight to congratulate ourselves on seeing the connections between the ears, legs, and tails of the elephant. But to “see” real connections we also need a spirit of playful, exploratory inquiry and skill in the unnamed art of making connections. And most of all, we need to have a taste for making connections, to retain the joy in connecting that is innate in all of us – though so often attenuated in school by habits of dissociated learning.

The relationship between parts and wholes has been an important theme of Logo from the beginning. But the difference between the two views of the parts of the elephant brings out one respect in which Logo has made progress in this domain. A traditional Logo approach to “making an elephant” might begin with an analysis into parts in order to set up subprocedures to draw each of them. The elephant is the superprocedure that combines the parts: 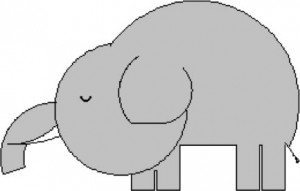 But while it is a strength of Logo that the parts can be dealt with independently, the second version of the elephant story highlights a weakness that was the mirror image of this positive quality: Logo was better at separating parts than at dealing with systems made of elements that interact dynamically with one another. A spreadsheet comes closer to being a “system”: When you change one number in a spreadsheet many others change as well. An animal is a system: When a part evolves, other parts may have to evolve as well. Even a videogame is a system when characters and objects respond to what the others do. But anyone who has tried to program a videogame in Logo (or most any other language!) will know how hard is to make this happen.

Recent developments in Logo take advantage of greater computer power to remedy this deficiency. For example, my colleague at MIT, Mitch Resnick, has made a Logo called StarLogo which allows many thousands of turtles to interact in “soft simulations” of such phenomena as traffic jams and the social behavior of ants. The key feature of StarLogo (which runs on a supercomputer called the Connection Machine) is that the procedures for the various creatures can run at the same time. It is an example of “parallel” computing or “multiprocessing.”

On a more accessible plane, the latest version of Logo from LCSI (soon to be released in a Macintosh version under the name “MicroWorlds”) allows smaller numbers (tens rather than thousands) of turtles each to run its own independent program at the same time. Thus the operation of an entire “project” is more like the image of a population of people interacting with one another than like a series of procedures coming out one at a time to do their thing. Where then is the elephant? In subsequent columns I shall develop the analogy between the biological and the Logo elephants along the lines of comparing the ideas that most powerfully allow us to see connections in the two cases. At least one of these powerful ideas is shared: the idea of system as a unifying concept. But each kind of system has its own specific intellectual connectors: The relation of form to strength and to energy plays a major role in determining how the parts of an animal interact. In the case of Logo (and computation) the connecting ideas are the ideas related to parts, wholes, and connections themselves. Thus the elephant itself is one of the many elephants behind the integrity of Logo.